Ground Fault Circuit Interrupters are safety features in your home electrical system.  These outlets and devices reduce the risk of severe or fatal electric shock by monitoring for electrical current loss/leaks or "ground faults". If the outlet notices a leak (this is measured by 6 milliamps or more of the electrical current leaving the device is not returning), they are designed to shut off the electricity to protect you from being electrocuted. By detecting dangerous current flow and instantly shutting off power, ground fault circuit interrupters save hundreds of lives every year.


Where to use them
Anywhere close to water. They are typically near kitchen sinks, in bathrooms near sinks, tubs, whirlpool and showers, exterior outlets, garages, hot tubs and near laundry tubs.

Where not to use them

Some areas that you may not want a GFCI are: sump pump, freezer, fridge and sewage ejector. If the GFCI trips, it could have costly impacts to your home, especially a sump pump.

GFCIs can be special breakers in your electrical panel (look for a Test button) or special receptacles (outlets) with Test and Reset buttons. Often you can find the letters “GFI” or “GFCI” on them.

• Circuit Breaker: A circuit breaker ground fault circuit interrupter is installed in the electrical  panel box. This not only allows the GFCI to protect selected circuits that may encounter a ‘ground-fault,’ but it will also trip when there is an electric short or overload. GFCI circuit breakers feature a "test" button on the front that you can use to test that it's working properly. This is the same sort of feature you find on GFCI receptacles (see below). After you press the "test" button you will have to reset the breaker to turn the circuit back on. The curly white wire pre-attached to a GFCI breaker must be tied into your breaker panel neutral bar when installed by a qualified electrical contractor. Note: When you test, this will disconnect the power to everything on that circuit until you reset the breaker. 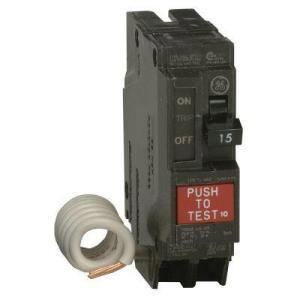 • Receptacle: This is the most common type used in homes. This type of GFCI fits into a standard outlet box and protects against ‘ground faults.’ This ensures that any electrical device plugged into an outlet is protected from "ground faults". 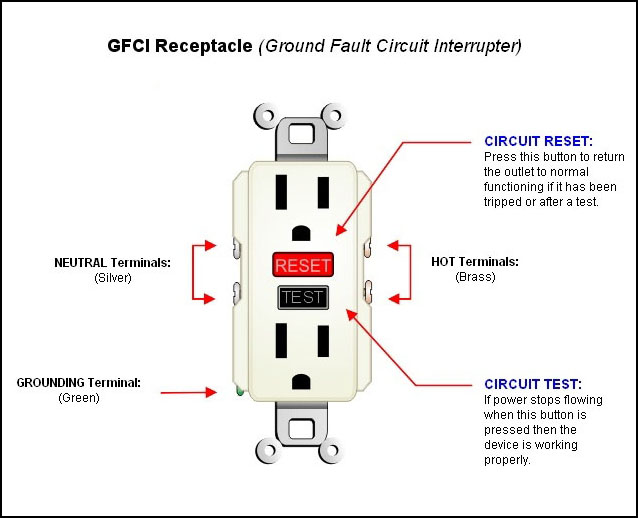 • Portable: Portable GFC interrupters can be plugged into an outlet and in turn, the electrical device is plugged into the GFCI. This adds extra protection to plugged in devices when a circuit breaker or receptacle circuit GFCI is not in use. Keep in mind that portable GFCIs should only be used on a temporary basis and should be tested prior to use. 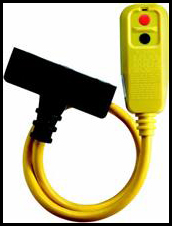 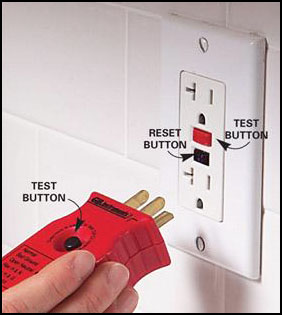 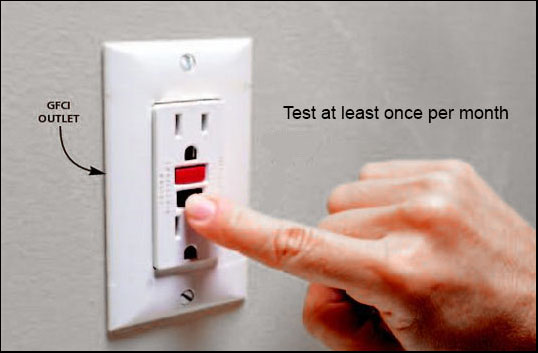 Test once a month and after thunderstorms.

When older units are tripping often or when the test fails. A reliable way to check an older GFCI is to use a circuit tester that has its own GFCI test button (sold at many DYI centers and hardware stores).  GFCIs can fail or become damaged and cease to function correctly. GFCIs devices can be damaged by lightning or electrical surges

All GFCIs manufactured after mid-2006 are designed to tell you when they fail. The vast majority indicate failure by shutting off power permanently. So someday your GFCI (and any other outlets connected to it) may simply stop delivering power and the GFCI will need to be replaced.